Skip to content
By: Dannielle WeintraubPosted on October 13, 2020
When Zeina Tawakol decided to take a holiday, she was looking for something adventurous and different, a break from her normal routine.


The answer to her call was in a trip to Nepal; 10 days of hiking, exploring and interacting with the local community.


“The decision to get out of my comfort zone and join Omar Samra and Wild Guanabana on a life-changing journey to Nepal was the best decision I made that year,” says Tawakol. “It wasn’t just a trip or an excursion, it was a decision to find myself,… meeting amazing people that I am still in touch with on a daily basis.”


Until recently, holiday travel for most well-off Egyptians involved conventional vacations in popular destinations – Mediterranean beaches, or cultural hotspots in Europe. But a group of young pioneers are trying to inspire passion for adventure travel to exotic locations, far away from luxurious hotels or shopping sprees.


When Omar Samra became the first Egyptian to reach the summit of Mount Everest in 2007, he became a national icon. Samra, who is the founder of Wild Guanabana travel company, is now working on inspiring other Egyptians to take risks and explore new frontiers.


After finishing his MBA degree in London, Omar Samra had started working in investment banking, but as a long-time traveller, he still had a passion for exploration and adventure.


“I had one of two choices, scale down travel and adventure, or make my career my passion,” said Samra, and in 2009, he founded Wild Guanabana in Cairo, offering a wide variety of adventure tours to locations around the world.


When Samra launched his company back in 2009, there were not many travel companies offering the same services. Adventure travel was limited to bikes and cars. Samra spotted a gap in the market for a different kind of adventure.


Now, after several years in the business, Samra is refining the kind of tours he offers. He says that he is working to change the perception that his trips are expensive, or require high levels of fitness, and Wild Guanabana now offers budget backpacking trips and tours that require no previous hiking experience.


“You don’t know what happens on the ground, and you can buy a cheap product or service, but you might be harming the hosting community and the destination suffers,” explains Samra. “Exactly like in Sharm El-Sheikh.”


It’s not just Egyptians who are starting to get excited about adventure travel. By 2010, 20 percent of Wild Guanabana’s customers were non-Egyptians, and in response to the growing demand, he launched a Dubai office in 2011.


With business taking off, Samra is considering taking another big step and opening a new branch in Saudi Arabia.


“It’s quite a key market for us, and being close to the ground will be greatly beneficial,” he says. “But we are still studying the idea as it is also a very challenging market, especially if you are not Saudi.” 
When Yasmine El-Rashidy and her three partners wanted to come up with a name for their new adventure travel company, they wanted something catchy, something easy to pronounce in both English and Arabic, and something that reflects who they are. They came up with Gazef, meaning risk.


As a group of four recent graduates, their decision to create their own travel company was in itself a risky choice. But Gazef, founded in November 2013, has been going from strength to strength.


“As founders, now we know that we have established something that happened all of a sudden and we are young and risking it and going against all the norms,” says El-Rashidy. “Yes, we are young, but we know what we are doing.”


When they started in November 2013, they offered four trip options – to Sinai, South Africa, Tanzania, and Thailand.


Initially dependent on circles of family and friends, their network soon expanded, particularly after feedback about the South Africa trip, and that soon became their most popular destination.


“It was very hard for us at the beginning to gain people’s trust, given that we are all very young, but we give it all what we have and the good reviews we get from people and the word-of-mouth helped us a lot,” says El-Rashidy.


Although a relatively expensive option, El-Rashidy says travellers are drawn to the South Africa tour for the sky-diving, hiking, safari trips and local market-hopping that they experience on the tour.


“We can tailor whatever you want, as long as it includes an adventure and is out of the ordinary,” El-Rashidy says.


Given the success of their first year in business, Gazef’s founders are looking for ways to expand the kind of trips they offer. They hope in the future to offer festival travel, organising unique tours to international festivals like the samba festival in Brazil.


Another activity they are aiming to introduce is volunteer travel, where travellers volunteer for a needy cause while abroad.


“Our mission is to let people step outside of their comfort zone and see where it takes them,” says El-Rashidy. “You never know what you can endure until you go.”


Omar Hossam started his travel company, Destination 31, in 2009, aiming to promote Egypt as a destination for adventure travel.


One of his missions was to encourage Egyptians to get involved in adventure trips inside and outside Egypt, and to get non-Egyptians to come to Egypt to experience adventure travel in the country.


The company offers tours to more than 18 destinations inside and outside Egypt, and activities including extreme sports, trekking, wildlife viewing and a lot more.


The most popular international trips are to Nepal, Croatia and Slovenia, Spain, Tibet, and Sri Lanka.


Inside Egypt, the post popular options are tours to Nubia, and Sinai trips which can include camping, visits to the national parks, and rock-climbing.


“One of our main missions to provide people with an alternative way to travel,” says Hossam. “It’s our goal to put Egypt on the map of adventure destinations.”


When they first started, Hossam says they were very picky with the groups they sent on their trips, as many of the trips required a certain fitness level and previous experience. Today, the range of tours offered is much wider and there are many options for those who are new to adventure travel.


Hossam is always looking out for new experiences that can showcase Egypt’s unique beauty.


“One of the areas we are looking to expand our activities in is the trekking trips,” he says. “There is a 90km trek from the coloured canyon (in eastern Sinai) to Ras Shaitan that no one has tried before, and we are hoping to set up a trip there soon.”


With a number of new adventure travel companies opening up, Egyptians now have the chance to break out of their daily routine and experience something a bit new, either by exploring new areas of Egypt itself, of taking an international trip to an unconventional destination.


“I highly encourage anyone in search of their self to step outside their comfort zone, to get out into to nature and to connect,” says Zeina Tawakol, a Wild Guanabana veteran. “This is where they will find true happiness.” 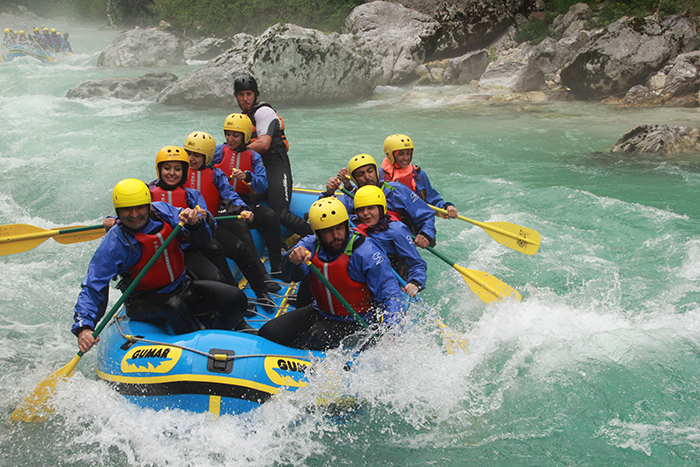 Rafting on the Soca river, Slovenia (Photo: Courtesy of Destination 31)