Apple‘s (NASDAQ:AAPL) fortunes in India — the world’s second-largest smartphone market — have been turning around despite the negative impact of the novel coronavirus pandemic on the country’s economic situation.

The iPhone maker recorded a 5% increase in shipments in India in the second quarter of 2020 while the overall market plunged — an impressive feat considering the premium pricing of Apple devices in the Indian context. Now the smartphone giant seems all set to make further inroads into this market, which has thus far been dominated by Chinese original equipment manufacturers (OEMs), thanks to a couple of favorable developments. 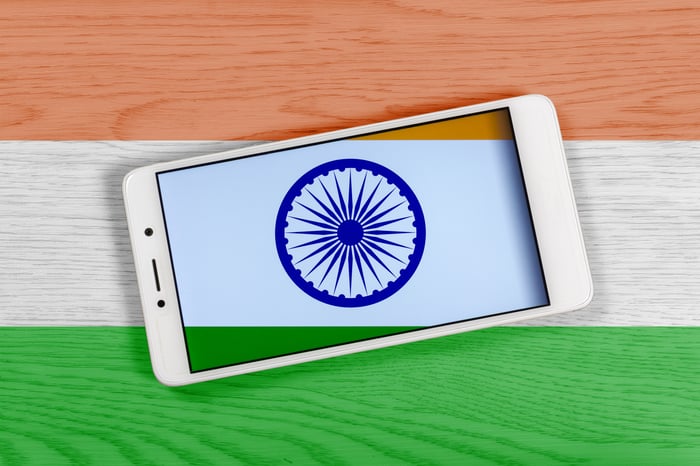 Apple makes a push to increase its reach in India

Apple has been selling its devices in India for more than a decade through resellers, but it was only in September of this year that the company finally launched an online store in the country. This makes India the 38th country with an online Apple store that allows users to purchase the company’s products and other services directly.

This move couldn’t have come at a better time. The California company’s decision to launch an entry-level device in the form of the new iPhone SE has worked well for it in price-sensitive markets such as India. In fact, strong sales of the iPhone SE are seen as the reason behind Apple’s shipment growth in India last quarter. And now the company is reportedly going to make its upcoming iPhone line-up more accessible by including a lower-priced “mini” device with a 5.4-inch screen that may be priced at $649.

With its new online store, Apple is now offering customers the chance to pay for their purchases in monthly installments through debit and credit cards, use its trade-in program, buy extended warranties, and benefit from other offers such as cashback bonuses and discounts. This could give the company a sales boost in India once its next-generation iPhones are released.

However, a new online store isn’t the only reason Apple’s prospects in India are looking upbeat right now.

iPhone manufacturing to get a boost

The Indian government has been working to incentivize smartphone production in India to make the country a manufacturing hub through a $6.6 billion plan. Apple’s top contract manufacturers — Wistron, Foxconn, and Pegatron — are reportedly planning to invest $900 million under this production-linked incentive (PLI) plan to boost local production of the company’s devices in the country, creating as many as 10,000 jobs, according to a Reuters report.

Citing people familiar with the matter, Reuters reports that such a move is likely to boost the production of the iPhone SE in India to 400,000 units per month by the end of 2020, compared to the current run rate of 200,000 monthly units. Other reports suggest that Apple could start building its next-generation iPhones in India by the middle of next year.

These moves to increase local manufacturing could help Apple reduce the price of iPhones in India by as much as 30% when factoring in the duties it is currently required to pay. As a result, the company will be able to attract a bigger customer base in the country, where it currently holds a market share of just 1%. More importantly, the timing of these developments couldn’t have been better, as smartphone demand in the country could improve thanks to the arrival of new technologies such as 5G wireless networks.