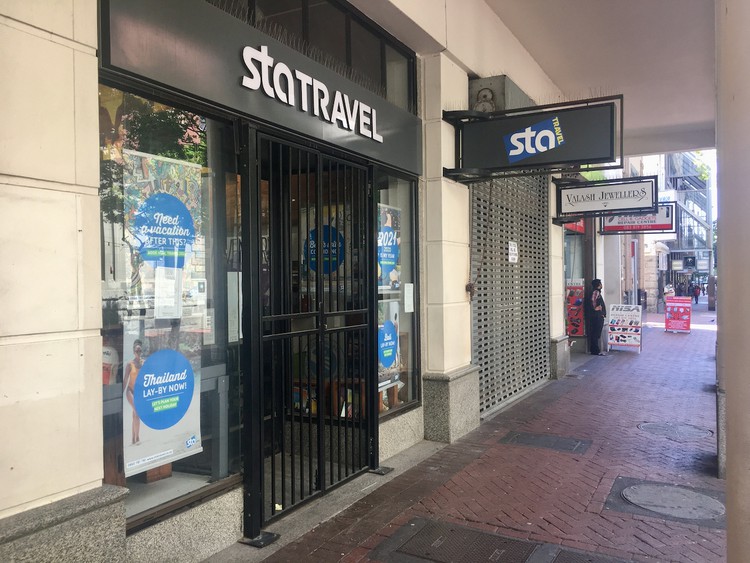 Since STA Travel in South Africa ceased trading on 21 August, staff and customers have been left in limbo. Photo: James Stent

Employees of STA Travel in South Africa have been left in limbo since 21 August, when the company ceased trading, one of the Covid-19 pandemic’s many business casualties. The company says staff contracts are still valid, which means employees can’t apply for UIF. Yet staff have been paid only a fraction of their August salaries and no September salary.

There has been no communication from the company since 10 September. A STA employee told GroundUp, “Termination letter requests continue to be ignored.”

The international travel company had been operating throughout the lockdown. Staff were working from home at reduced salaries, and the group had managed to reduce costs by negotiating rent holidays on the 21 branches across South Africa, according to a STA manager who wished to remain anonymous.

STA continued to sell packages during lockdown and people were encouraged to book their 2021 trips. Customers whose travel plans were cancelled due to the lockdown, received ‘travel credits’ instead of cash refunds. They were told that these would be refundable when lockdown eased.

Then on 19 August, the holding company, STA Travel Holding AG, revealed to its worldwide staff it would be filing for insolvency. In a statement, Casper Urhammer, the Switzerland-based CEO of both STA Travel and of its holding company, Diethelm Keller Travel Group (which is itself 85% owned by Swiss firm Diethelm Keller Holdings) announced that he would be resigning from leading the STA Travel group, and handing over operations to outside administrators.

On 20 August, it was reported that STA Travel Holding AG had filed for insolvency.

No public announcement was made about the status of the South African company.

On 24 August, STA Travel South Africa posted an announcement on its Facebook page: “To our valued customers, due to the recent announcement that STA Travel South Africa has ceased trading, unfortunately our travel experts are unable to assist you at this time. Please be assured that if you had a previous booking with us, or hold a live booking, you will receive further communication in the coming days. We are sorry for the inconvenience and the limited information available to you at this time.”

On 25 August, Justin Kable, the country manager for STA Travel SA, sent an email to all STA Travel employees, which announced that – following the decision to cease trading – “We are trying our best to provide as much information as we can during these difficult times and will provide regular updates.”

On that day, employees were not paid, though this was not mentioned in the email.

The next and so far final update from Kable was on 10 September. Kable announced then that the STA South Africa board had decided to enter voluntary liquidation, and that the board had “recommended this view to the shareholder and requested that the shareholder adopt a special resolution to voluntarily wind up the company under the supervision of the creditors”.

“Whilst we await action on the above view, presently all contracts of employment between the Company and employees continue as per their existing terms and conditions. You will be provided with further updates as to effect on the employment relationship as the process of winding up the company progresses,” Kable said in his 10 September email.

Since staff contracts are said to be still valid, staff claim they are unable to apply for UIF. Many are hoping they can get Covid relief funds.

Some employees told GroundUp that there had been retrenchments during the lockdown period, and reduced salaries, but the liquidation announcement came as a shock, since staff had been selling travel packages believing that these would be honoured.

Frustrated customers have been harassing their travel agents to find out about the status of their trips and the money they paid. Some staff have shut off their social media accounts and personal phones because of the constant calls. They say they have just as little information as the customers.

According to the Insolvency Act, when employees’ contracts are suspended due to liquidation proceedings, they are entitled to unemployment benefits. But no liquidators have been announced.

Attempts to find out whether a liquidator has been appointed in South Africa have so far been unsuccessful. The computer system for the Masters of the High Court in Johannesburg, where STA Travel holds its registered headquarters, has been down for more than a week, according to a staff member. Calls to the national office of the Masters of the High Court have been unanswered. Deloitte has said it is not involved.

Meanwhile hundreds of customers have been left stranded. STA Travel SA’s Facebook page is filled with customers who have no idea what is happening to their deposits. Some claim STA Travel has received refunds from airline companies, and has not passed these on to consumers.

On the company’s website, all pages have been replaced by a statement: “Please be advised that the board of directors of STA Travel (Pty) Ltd has resolved not to begin business rescue proceedings (as contemplated in the Companies Act, 2008),” and a link to a pdf which contains a copy of the Form CoR123.3 (Notice of Decision Not To Begin Business Rescue), and a fuller statement from the board of STA Travel. This communication is signed by Reinhard Kotzaurek.

On the website of the Companies and Intellectual Property Commission, STA Travel South Africa is now listed as being in voluntary liquidation.

Attempts to contact the directors with the details available on STA Travel South Africa website have been unsuccessful.

Diethelm Keller Holdings replied to us: “STA Travel Holding AG was an independent legal entity. You may want to contact the local authorities to find out more about the assigned official administrator in respective countries – we may not provide any contact details. FYI, Diethelm Keller is not insolvent.”

According to the Diethelm Keller Group’s 2019 Annual Report, their business unit, Diethelm Keller Travel (85% owned by DKG), of which STA Travel was the jewel in the crown, achieved sales of approximately R23.4 billion in 2019.

In Australia, Deloitte has been releasing public statements and guides for consumers who have been affected by STA Travel Australia’s liquidation. The liquidators report that creditors in Australia are owed approximately R838.8 million. Included in this amount is a R168 million fine issued by the Australian courts in April this year for “false or misleading claims” made by STA Travel about one of its products. The liquidators report that attempts to communicate with the Swiss-based holding company to see if STA Travel Australia could be rescued have been in vain: “We have had no response and consider a global restructure unlikely”.

In New Zealand, it was reported Deloitte was running into difficulties locating money. Stuff New Zealand reported Deloitte as saying that, “Because the international STA group has run a global treasury and finance function, this has meant that a lot of the necessary data and information have been difficult to secure.” The liquidators have pointed to irregularities in the manner in which STA Travel had managed client money, holding it in accounts used for operating expenses and sending it overseas.

According to a 5 October report from the liquidators, so far approximately 900 creditors are owed between NZ$11.5 million (over R125 million) by STA Travel Group in New Zealand. Employees alone are owed R4.5 million. The liquidators do not see good prospects for the return of client money.

In the United Kingdom, people who booked trips with STA Travel should be able to get full access to refunds, thanks to the UK’s Air Travel Organiser’s Licence (ATOL) scheme. ATOL is a government-run financial protection programme run by the Civil Aviation Authority that reimburses travel consumers when travel service providers go under.

© 2020 GroundUp. This article is licensed under a Creative Commons Attribution-NoDerivatives 4.0 International License.

You may republish this article, so long as you credit the authors and GroundUp, and do not change the text. Please include a link back to the original article.