Allyson Briggs and co. turn the past into a lovely present – the only thing missing is the bow. Have you noticed the trend these days toward nostalgia? No, of course you haven’t because it isn’t a trend; for a while now people have been diving back into the music […]

Allyson Briggs and co. turn the past into a lovely present – the only thing missing is the bow.

Have you noticed the trend these days toward nostalgia? No, of course you haven’t because it isn’t a trend; for a while now people have been diving back into the music from bygone eras, not for the sake of nostalgia but because the music is timeless, it’s classic, just like the group Fleur Suele, a musical treasure that has made it their mission to spread around the music from earlier in the last century. Their CD SWING AROUND THE WORLD focuses on a very specific time and style of music from the past: swing music from the 1940s, originating in various countries and cultures, and the musical journey they create might just as well be the summer vacation you dreamed of but couldn’t take this year. So get out your passport, press play and enjoy the trip in your mind.

While listeners will discover that Swing Around The World shines a strong spotlight on the World War II swing music of America, the international influence is unmistakably felt through stunning renditions of Charles Trenet’s “” and Renato Carasone’s “Tu Vuo’ Fa’ L’Americano”. These songs originating out of other countries are special treats that the listener will probably recognize, but just in case one doesn’t remember the Yiddish swing hit “Abi Gezunt” or the German tango “Der Wind Hat Mir Ein Lied Erzahlt” there is great satisfaction in the band’s version of “Besame Mucho” and the Celia Cruz cha cha “Tu Voz,” both songs that everyone should know (and anyone who doesn’t will be treated to a swell introduction here). Rounding out the collection of songs are glorious versions of “On The Sunny Side of The Street” and “The Man I Love”, to say nothing of one of the best “Moonlight Serenades” you will ever hear. From start to finish, the entire album is the kind of cd that, listening to, just makes you feel happy, peaceful, calm, and at your leisure.

And why not, with bandleader and chanteuse Allyson Briggs at the main mic? None of these songs is original – they’ve all been sung before, heard before and, in some cases, played to death; yet, in Ms. Briggs’s more than capable hands and vocal cords, they become fresh, new, as a pressed flower magically rehydrated. Briggs and her incomparable team of musicians make the wise choice of staying close to home with the arrangements so that die-hard fans could not possibly take umbrage at what they have created, but they also make sure to remain artists in the act of creation, giving themselves permission to play when it is appropriate, to have fun with their work and not just become a cover band mimicking original recordings. And the resulting recordings are blissfully brilliant. Note the way that each musician creeps forward in “On The Sunny Side of The Street” to show off enough to make you mutter “DAYum!” and enjoy the sweltering horn solo on “The Man I Love” — and these are just two examples of the little musical petit fours that lay in wait around each melodic corner – and Allyson Briggs is the perfect tour guide.

Ms. Briggs is clearly a devotee of this music and of this era. Anyone who has seen Fleur Seule live or seen a photograph of the band or Briggs cannot have escaped the lady’s personal aesthetic. Allyson Briggs is a fashion plate of the highest order who has meticulously crafted her look so that it will go along with her sound and that of her band. While at the mic, Ms. Briggs gives every appearance of being in a Stanley Donen or George Cukor film – standing on a stage in a club, at the microphone, not a hair out of place, her seams straight, and her beauty spot prominently on display. Watching her, one thinks that Allyson Briggs is a vintage vision to behold… and then she opens her mouth to sing and you realize hers is a nostalgic noise to embrace. This voice is one that stands alone in its rich beauty and exquisite phrasing but Allyson Briggs evidently recognizes the importance of being one with the song, as well as one with the band. Never, at any time, does Briggs allow herself to become more important than the other members of Fleur Seule, including the songwriters, and that’s what makes her musical gift shine even brighter. By being one of the gang, by keeping the emphasis on the reverential showcasing of the music, Allyson Briggs places a brighter spotlight on everyone involved, and those involved raise her up into the prettiest place in the music, making every moment of SWING AROUND THE WORLD one to enjoy.

And enjoy it, you will.

From This Author
Stephen Mosher

Tue Sep 29 , 2020
MANHATTAN BEACH, Calif., Sept. 29, 2020 /PRNewswire/ — As summer comes to an end and we are headed into fall, followed by the holidays, Mat Dagilis and Trevi Sawalich, along with Trevi’s young son and daughter, Jake and Gianna, are looking forward to some exciting things this holiday season.  Summer […] 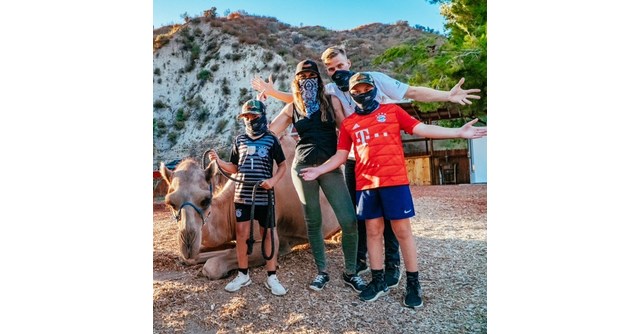