Skip to content
By: Dannielle WeintraubPosted on October 13, 2020
CLOSE 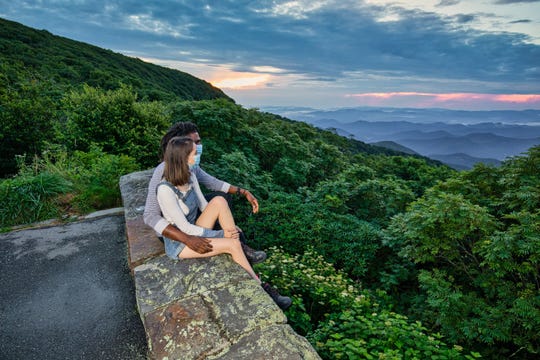 Asheville is encouraging visitors to observe COVID-19 precautions and take advantage of the area’s opportunities for socially distanced activities in the outdoors. (Photo: Courtesy Explore Asheville)

Explore Asheville, the North Carolina town’s tourism promotion organization, decided in June that it was time to entice tourists back. But they were cautious. They focused the ad campaign on potential visitors who lived within 100 miles, close enough to drive. They used reams of data to target the online ads at people with discretionary income and also an inclination to follow rules and adhere to pandemic-imposed safety restrictions.

Most importantly, using data from Johns Hopkins University, they only showed the ads in counties with low levels of COVID-19 cases. By mid-July, Explore Asheville suspended the marketing campaign, because so few counties met that criteria.

“At that point, there’s so many counties we would have to exclude, it would be better if we just got on the phone and called the people that could come,” said Marla Tambellini, deputy director and vice president of marketing for Explore Asheville.

Southern cities that rely on tourism realized the depth of that dependence during the coronavirus pandemic. For months, many Americans barely left their homes and certainly weren’t traveling. In Asheville, dozens of bars and restaurants have closed for good. Some New Orleans musicians have left town, unable to pay rent and moving back in with their parents. In Charleston, S.C., one long-time resident had never seen so many vacancies among the shops on King Street.

The people charged with attracting visitors to these cities are figuring out what message to send amid a pandemic. With no concrete sign of help from the federal government, people who work in the hospitality industry — waiters, cooks, housekeepers, managers and musicians — know they need tourists. Some of them question, however, the wisdom of welcoming visitors who might also bring more cases of COVID-19. And long simmering debates about balancing the demands of the tourism industry against the needs of residents feel more urgent than ever.

Attracting tourists during a pandemic

The pandemic has forced tourism marketing agencies to adjust their pitches. In Asheville, the emphasis is on exploring the outdoors, where social distancing is easy. Charleston is promoting its historic city center as a substitute for Europe, since that continent still prohibits Americans from entering. New Orleans must sell itself without the lure of bars or live music, both of which are still prohibited by the city. The states have taken a measured approach to reopening, with individual cities often going beyond restrictions imposed by their governors.

The most pressing goals for the marketing agencies, however, are more prosaic. 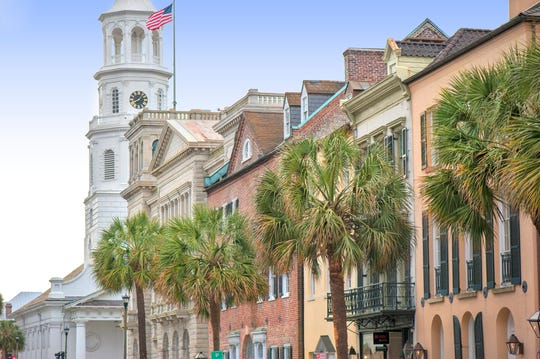 Charleston, S.C., is selling itself as a substitute for Europe since that continent is closed to American visitors. (Photo: Courtesy Explore Charleston)

“We’ve distilled our mission down to the very simplest thing, which is to create an overnight visitor,” said Helen Hill, CEO of Explore Charleston.

Most tourists will be driving, although they’re willing to drive farther than they would before the pandemic. They will probably be spending less. Hygiene protocol will also help people decide where to visit.

“The consumer is choosing destinations where they are going to feel safe,” said Mark Romig, senior vice president and chief marketing officer for New Orleans & Company.

Even without much advertising, tourists are coming back. In Asheville, for example, hotels were 56% full in August with higher rates on the weekends, according to data provided by the Buncombe County Tourism Development Authority. Houses and condos available for short-term rentals were 76% full. 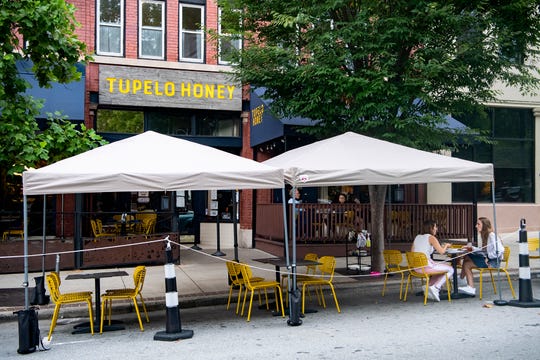 Outdoor dining for Tupelo Honey in Asheville has been expanded onto the street in front of the restaurant downtown. (Photo: Angeli Wright, ANGELI WRIGHT/ASHEVILLE CITIZEN TIMES)

“People who make money off of our visitors are very anxious for the restrictions to be lifted and for people to come,” said Julie Mayfield, an Asheville city councilwoman and Democratic candidate for state senate. “I do think people who live here are still very wary about how crowded downtown is. I’m not really going downtown on the weekends at this point.”

Tourism has been on rise around the world. Since the 2008 recession, every year more people visit Charleston, said Daniel Guttentag, a professor in the College of Charleston’s Hospitality and Tourism Management program. In 2019, according to New Orleans & Company, a record 19.75 million people visited the Crescent City. That growth has led some to ask whether the needs of residents are being trampled by tourists. 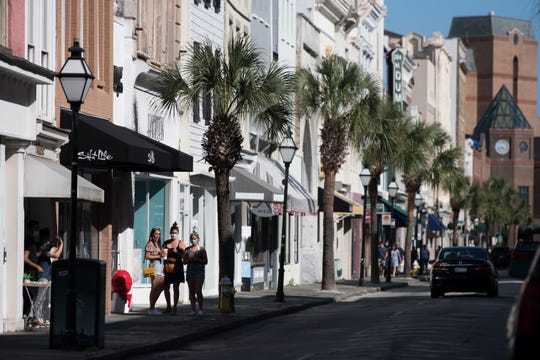 The Buncombe County Tourism Development Authority, which runs Explore Asheville, is funded by a 6% tax on hotels, which brought in $19.4 million in fiscal year 2019. Currently, North Carolina state law requires that three quarters of that money be spent marketing the city. Mayfield has long pushed to spend a larger percentage of that money on projects that benefit the community, like public transit, infrastructure and affordable housing.

Ami Worthen, a longtime Asheville resident, thinks the city would be better off abolishing the Tourism Development Authority.

“They control a really huge budget that grew exponentially from their inception. They were spending money on advertising and bringing people in, which brought them more money, which enabled them to spend more on it. It became a feedback loop,” Worthen said.

In New Orleans, a study on tourism by an outside consulting group made attracting more visitors the primary measure of success, said city councilwoman Kristin Palmer, whose district includes the French Quarter. 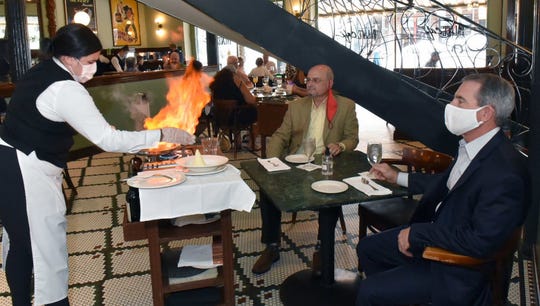 Although bars are still closed and music is not allowed, New Orleans continues to attract visitors for socially distanced vacations. (Photo: Courtesy New Orleans and Company)

“The way we should measure the success of the industry is by how much money people in that economy are making,” Palmer said. “How can we have an industry that creates jobs where people can afford to buy a house and have a decent quality of life?”

Palmer advocates for sustainable tourism, a movement that aims to manage tourism and its impacts on people, places and the environment.

Charleston is often presented as a model of sustainable tourism in the United States, but some fear the city is headed toward “overtourism” that could drive away residents. In 2019, the Historic Charleston Foundation, a local preservation group, held a forum on sustainable tourism.

“We’re famous for being a hospitable, friendly city,” said Winslow Hastie, president and CEO of the Historic Charleston Foundation. “I’m worried that’s going to start to fray, because people are just overwhelmed and frustrated.”

When the visitors vanished at the start of the coronavirus pandemic in March, it made clear how deeply these cities’ economies were entangled with tourism. Tourism leaders hope that realization dampens criticism of their industry. For others, though, it drove home the danger of depending economically on tourism.

“What COVID-19 has clearly shown is that the industry is very susceptible on many levels,” said Palmer of New Orleans.

According to a report from the Brookings Institution, economies that rely on tourism will be hit particularly hard by the coronavirus pandemic. New Orleans, which also depends heavily on the vulnerable energy sector, ranked among the top five most economically at-risk large cities in the U.S.

Charleston, S.C., is selling itself as a substitute for Europe since that continent is closed to American visitors. (Photo: Courtesy Explore Charleston)

Palmer and others hope that the post-pandemic rebuilding of the tourism industry can be an opportunity to create an industry that spreads its benefits more broadly across the community.

The very size and importance of tourism in towns that rely on it, however, makes it hard to talk about reforms.

“If you say anything negatively against tourism, then you’re speaking ill of the city,” said Stephanie Burt, a Charleston multimedia journalist and host of the podcast The Southern Fork. “I don’t like that duality. There’s a lot on that continuum between anti-tourism and always pro-tourism.”

Chef William Dissen owns The Market Place in Asheville, a farm-to-table restaurant founded in 1979. He recognizes that his business has benefitted by the growth of tourism. But in the 12 years he’s lived in Asheville, he’s seen seasonal tourism turn into visitors all year long. He hopes that tourism can be managed instead of merely encouraged.

News tips? Story ideas? Questions? Call reporter Todd Price at 504-421-1542 or email him at [email protected] Sign up for The American South newsletter.