Park Hotels and Resorts (NYSE:PK) saw its stock price jump almost 9% on Monday after the hotel real estate investment trust (REIT) issued a business update that showed some positive momentum. The REIT, which owns 60 hotels, reported that 46, or 77% of its hotels, are now open along with 59% of its rooms.

For the company’s 37 hotels that were open for all of August, the occupancy rate was 38.8%. The break-even occupancy level is between 35% to 40%.

Park Hotels and Resorts has undergone significant permanent staff reductions through the pandemic, which will result in annual savings of $50 million to $70 million compared to the previous year. 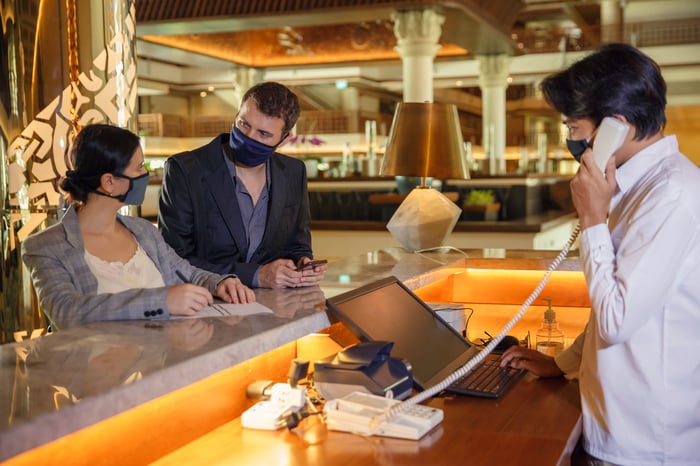 Also, Park officials increased its revolving credit facility and near-term liquidity by $75 million to $1.1 billion. In addition, they agreed to extend $901 million of the aggregate commitments for two years to December 2023. Further, the company raised its carve out for acquisitions funded with equity proceeds from $500 million to $1 billion. Park had cash and cash equivalents of $1.2 billion as of July 31.

According to a statement from Thomas Baltimore, Jr., Park Hotels and Resorts chairman and CEO:

Over the past couple of months, we have opened additional hotels and experienced better-than-expected results through July and August, and we have begun to quantify and execute on cost-savings initiatives as we work with our operating and brand partners to reposition the operating model. Additionally, we have completed an amendment process with our lending partners to extend our revolving credit facility by two years, further improving our liquidity position and providing us additional flexibility as we look to turn the corner and pursue opportunities as they develop in the coming months.

In the fourth quarter, Park will open 12 additional hotels, which means 58 of their 60 will be operational, and 97% of the rooms will be open. The other two hotels will be open in the first quarter of 2021.

The REIT’s stock is trading at about 11% per share and is down roughly 57% year to date.