HIGHFILL — The Northwest Arkansas National Airport saw the usual slight seasonal dip in overall passengers in August compared to July, but the numbers are still improving thanks to a trickle of business travelers returning.

“The actual enplanement numbers dropped from July to August, but the percentage change from last year for the corresponding months continued to improve,” said Aaron Burkes, airport executive director. “The reason for the difference is that July is traditionally a huge month and August is not as big.”

Burkes said in August 2019, the airport had a huge drop in total passengers, but it was still a very strong growth month because of the seasonality of air travel, which means fewer vacationers. The pattern is pretty predictable from year to year, he said.

The number of passengers has been steadily improving at Northwest National since bottoming out in April amid the spreading covid-19 pandemic. August this year saw 25,068 people fly out of XNA, which was down slightly from 25,739 the previous month.

Year-to-date, traffic was off 59.1% at Northwest National through August, compared to 2019. Monthly percentage comparisons to last year have improved each month since April.

“It is encouraging to see the rebound in passengers continue for four consecutive months now,” Burkes said.

Nationally, raw August data for the number of people passing through Transportation Security Administration checkpoints showed traffic was off 71.4% compared to the same month last year. Those numbers include flight crews in addition to passengers.

Burkes said September seems to be going better than expected. Through Sept. 22, XNA had 19,642 people pass through the Transportation Security Administration checkpoint, down 66.7% from the same period last year.

“The normal fall slowdown in leisure travel that everyone expected for September has not really occurred,” Burkes said. “Either leisure travel has held up more than expected or business travel is coming back by enough to make up the difference. In any event, we continue to see incremental growth in passengers.”

Vacation travel outpaced business travel at the airport this summer, and officials have been concerned passenger numbers could drop significantly as they get into fall and out of the traditional leisure travel season.

Mike Lum with Volaire Aviation Consulting said in a report Wednesday to airport officials airlines have seen a slight uptick in business travel, particularly in the Midwest. Businesses on the coasts still aren’t flying.

“Business travel, believe it or not, is trickling back,” Lum wrote. “American reports it’s returned to about 15% of previous levels – up from less than 5% just a month ago.”

That’s good news for Northwest National, where traffic has typically been driven by business travel related to companies such as Tyson Foods, J.B. Hunt Transport, Walmart and their vendors. Those folks have not been traveling since the pandemic began, according to airport officials.

The airport this year went from 329 flights in the last week of February to 19 a few weeks later, according to U.S. Department of Transportation data. The airport averaged 302 flights a week in 2019.

In April, traffic at Northwest Arkansas National Airport was down 96% from last year, and XNA hit a low of 10 flights per day. 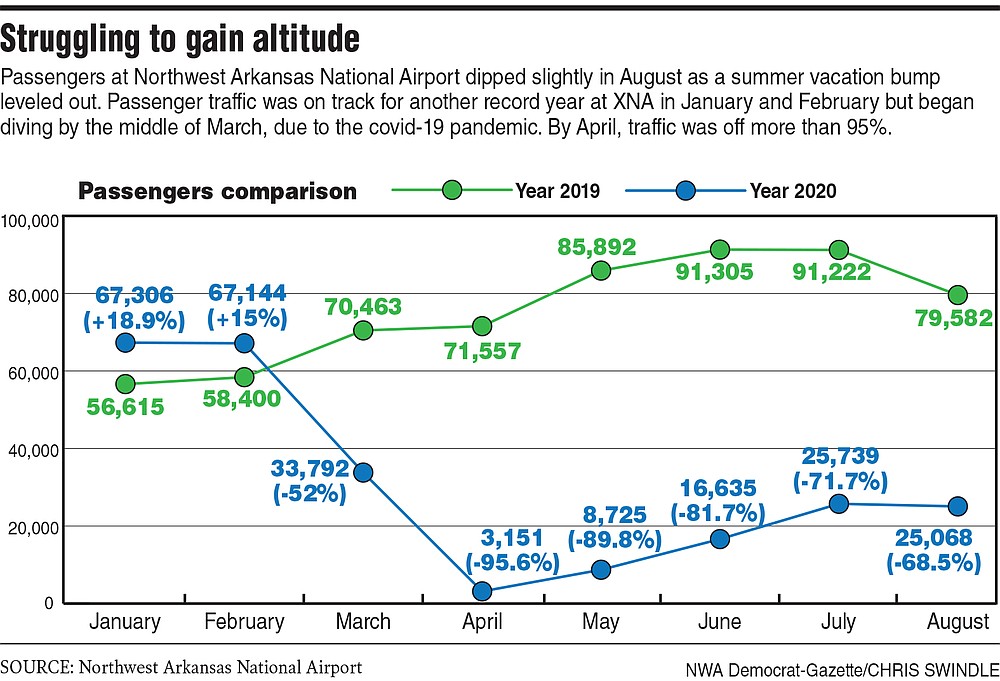 Ron Wood can be reached by email at [email protected] or on Twitter @NWARDW.